MINUTES OF THE PARISH ANNUAL MEETING

The meeting commenced at 7.0pm with Fr. Martin and Rev Tony Felton representing the clergy (Rev Mike Wells was unable to attend), members from the Finance & Fabric committee, PPC and parishioners.  33 people in all.

Fr. Martin thanked everyone for attending and briefly mentioned our background as one of thirty Benedictine parishes across the country.  He paid tribute to the generosity of the parish earlier in the year, in raising £46,000 for the Alive In Faith diocesan appeal for funds for priest’s training.

Pamela Saint-Mart (Parish Treasurer) issued a set of annual accounts from September 2016 to September 2017 comparing them to the same period in the previous year.

It was noted that there was an increase in expenditure on the church building due to the new kitchen units, sink, dishwasher and fridge, organised and installed by Pamela and her brother also the kitchen and toilets were redecorated by Andy Bradley.  In the grounds, our tree surgeons have removed an area of small tress and undergrowth to reclaim the burial spaces at the Grange Road entrance and volunteers have removed the old hedge along the line of the presbytery.  It was also mentioned that there was a fall-off in income from weddings and funerals by comparison with the previous year.

Fr. Martin thanked Pamela for all her work with the finances and all the other people who raised money for the parish.

Brian Lewis explained that the PPC had suggested that a meeting room should be available for the parish as the hall could only be used outside school hours and is anyway an impersonal and acoustically challenging space for small meetings.  The matter was passed to the Finance & Fabric Committee.  Chris Boyes read to the meeting a document he had prepared for tht committee’s discussions which examined the four alternative proposals (please see separate page below).

Fr. Martin commented on the benefits of using people’s homes for prayer and discussion groups, thereby taking the faith into the wider community rather than everything being centred on the church.  There was discussion about whether the hall could be adapted with a suspended ceiling to improve the acoustics although this might conflict with the school’s use for games.  Moveable screens were also discussed to create a smaller area for a meeting.  It was mentioned that if, for any reason, the school closed, then the hall would be available for the church to alter as it saw fit.

Aloma Do Rosario spoke on behalf of Linda Last who is away.  The group is aimed at children aged 3 – 8 and will take place on 2nd, 3rd, 4th Sundays of the month (the 1st Sunday is a family mass).  It is a 3-year plan using the Liturgy for Children scheme.  Children should be brought to the hall for 10.20.  The gospel will be told as a story, there will be artwork and prayers before lining up to join the offertory procession with their books.  After mass the books will be kept at the church but children can take them home at half term to show their parents.

It was suggested that it is announced at each mass where the children are, for the benefit of any visitors.

Brigid Rawlinson stated that a group of 6 – 8 people met every last Thursday of the month at Anne Felton’s house.  There was an honest and open discussion about faith, in a friendly atmosphere.  Newcomers would be welcome.  Occasionally speakers have been invited, a bible scholar from Southwold and a theologian from Bungay.  A prayer group is being considered or the current discussion group might extend to include prayer and singing.

Marcia Fenwick explained that an 18month distance learning course for catechists is being run by the diocese as part of the New Evangelisation programme.  This leads to a certificate based on assignments rather than exams.  Marcia, Aloma Do Rosario and Tony Harrison are taking part.

Fr Martin stated that Tony Harrison will be running confirmation classes for teenagers starting on 5th November at 4.45pm in the hall.

Pam Storey reported that so far this year £2,475 has been raised for the Air Ambulance and Beccles Hospital.  She is intending to repeat the successful Christmas Hampers this year and the raffle will be on 17th December.

Sydna Playford reported that this year £1,254.57 has been raised for Cafod so far.  Some donations come from the church box, emptied monthly, but by far the greater amount is from tea & coffee at the 6pm mass where the average attendance is about a dozen people.  She thanked Gloria Willis and Molly Crisp for all their work.

Mary Ellwood reported that the last year has seen some major milestones, the secondary school is finished the first students have passed their exams and also the some students will be going on to university.  £6,800 has been raised for the playground and the next target is for a full library.  She commented that the school is still only recognised as a primary school and until an inspector is sent from Kinshasa the secondary teachers are unpaid.  The container of our contributions which is also shared by the White Fathers and the Silesian Fathers will be leaving at the beginning of November and she was very grateful for the generous donation of £1,000 from Norton Peskett to cover the transport costs.

Terry O’Brien handed out copies of the draft handbook and explained the contents, how it was organised and what the final copy will look like.  There will be 8 loose leaf appendices which can be easily replaced if information on them changes.  He asked that parishioners read the draft and contact Fr. Martin is they feel something should be added.

Fr. Martin stated that the handbook would be of benefit to all parishioners, not just to newcomers and should be available in 2018.  He thanked Terry for all the work he had put into this project.

Wednesday 22nd November 7.0pm there will be a mass for the deceased.

Wednesday 20th December a carol service in being arranged by Hilary Wells and Linda Last.

Sunday 4th March 2018 a visitation by the Prior of Downside, Dom Leo Maidlow Davis.

At Pentecost it is possible that Downside Oblates will lead a Mission under the Renewal programme in the parish.

Finally Brian Lewis thanked Fr. Martin for all that he has achieved over the 7 years that he has now been with us.

In June of this year at the PPC a request was made that a small meeting room should be created for parish use.   It has been suggested that it is inappropriate for the priest’s private dwelling to be used for anything other than his own personal requirements.

At present the church, which owns the hall, has access to it only out of school hours.  It is an impersonal and acoustically challenging area but remains suitable for larger scale social gatherings or a Tots Club, Line Dancing, etc.  But the request was for a smaller area which would be more congenial for: discussion or prayer groups, the Wednesday Club, 1st Holy Communion Group, Children’s Liturgy, committee meetings, celebration of weekday morning mass.  It would also provide somewhere for the parish priest to conduct meetings without recourse to the presbytery.

This matter has been examined before by the Finance & Fabric Committee in 2009 and 2012 schemes were discussed and then shelved for various reasons.  The options currently examined by the committee were as follows:

1/.   Creation of a Room Within the Presbytery.

This would be very unlikely to receive the approval of Downside.  If, in the future, as seems possible, the parishes of Beccles & Bungay were run by one priest it would be likely that the Beccles presbytery would be offered as a home for a retired priest (monastic or diocesan) or indeed even sold.

This would require planning permission as it could not be classed as a temporary structure.  The church and presbytery fall within a Conservation Area and if it is clearly visible from Grange Road it would be less likely to receive permission.  It would also probably require Building Regulation approval which could be onerous as site huts generally do not come up to relevant standards of insulation etc.  Its distant location would make it feel less part of the church and it is also probable that Downside would not support this proposal.

In 2009, a price was obtained from a joinery workshop for a sliding/folding screen to enclose the chapel on the line of the organ loft above, creating an area of approximately 3.6 x 5.8m.  The panels of the screen were to be: lower 1/3 solid with upper 2/3 glazed thereby giving visibility of the main altar and mass.  The intention at that time was to provide somewhere carpeted and easily warmed which could be used for winter weekday masses and where Children’s Liturgy could possibly take place with minimal disruption to services.  This scheme was dropped as the then Abbot did not like the idea of altering the interior of the church in this way.  It still remains unpopular with many for aesthetic reasons.  It should also be said that there is no natural light or easy direct access to a disabled toilet for a wheelchair user.  It might also not be a congenial evening time venue for meetings and would not be easy to hire out should we want to.

Because of the drawbacks of the above locations, in 2012 we employed a local architect to design a scheme for a small new building to be attached to the existing porch of the hall (see plan overleaf). This would provide the parish with a meeting room of 4.5 x 6.5m, a disabled toilet, a small interview office, a small kitchenette for tea/coffee making and level access into the hall for wheelchair users.  The idea was shelved at that time due to expensive maintenance works on the church gutters and downpipes and the installation of a gas boiler.

This scheme has now been looked at again and costed at approximately £100,000 inclusive of professional fees and applications etc.  This includes £10,000 for an elaborate front entrance porch and steps suggested by the area planning officer but which we would not want, relying instead on the ramped access at the rear.  Of this cost, it is possible Downside Missions Trust might perhaps offer 1/3 and a further 1/3 might be raised from church charities leaving the parish to find the final 1/3.

The members of the committee were overwhelmingly opposed to this scheme as it was such a large expenditure for a small building and raising the money could cause the parish to be in debt for some years to come. 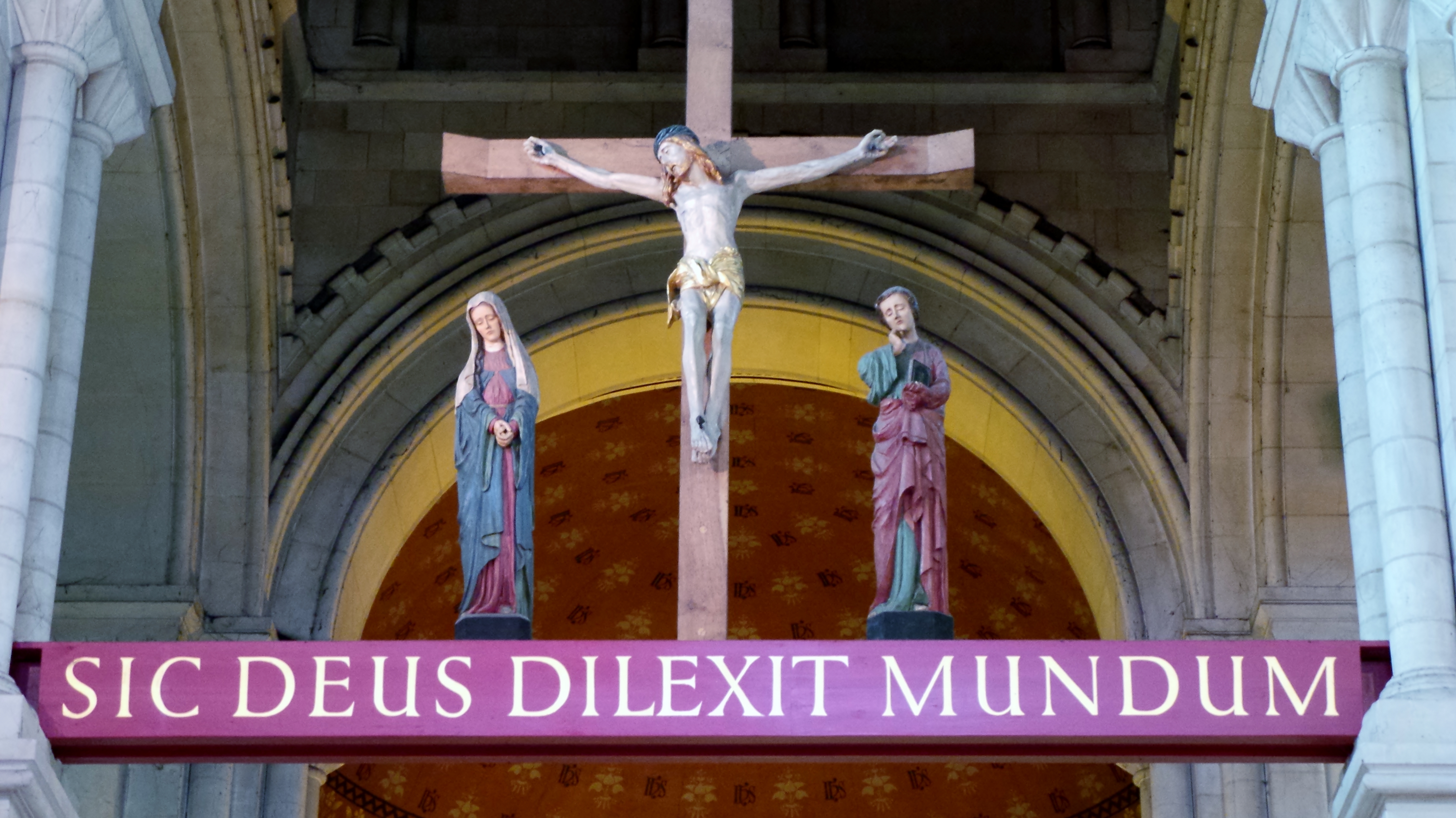 A tour of St Benet’s